The main advantage of a capacitor is that there is no time delay in turning on as it always conducts. The disadvantage is that the amount of current it can handle is limited to a few thousand amps, depending on the surge voltage. For this reason, an arrestor should always be installed with a capacitor to protect it from intense surges.

The continuous current flowing to a surge capacitor does not cause a waste of electricity. The capacitive reactanc cancels some of the inductive load, actually reducing the net power used by a fractional amount, thereby slightly reducing the power bill.

We offer three surge capacitors: 250 volt, single phase; 600 volt, three phase; 650 volt, three phase. An internal discharge circuit is provided. Mounting is facilitated by a three quarter inch nipple at the top of the unit. The black wires connect to the circuits, and the white wire connects to a ground. The housing is made of a non-conductive cylinder. Mounting brackets are available for each model of surge capacitor at an additional charge. They may be obtained by adding the part number MB to the end of the surge capacitor model number. 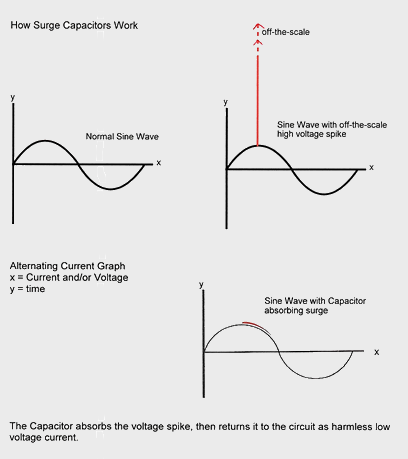